The Washington Post throws its own study under the bus

It must suck when the evidence does not support your narrative. The Washington Post reviewed the federal campus safety data for over 2,000 colleges. According to their findings, over 1,300 of those schools had no reports of rape on campus in 2014. That would seem like a good thing. After all, it would imply no one was raped on campus. However, the Washington Post took the results a different way:

There were no rapes reported in 2014 at California State University at Long Beach, a public university with about 36,000 students. That could seem like a positive sign. But school officials aren’t boasting about it. They know sexual violence victims are often reluctant to step forward, and they want to hear more often from survivors.

“We always operate under the assumption that zero does not really mean zero,” said Cal State Long Beach spokesman Mike Uhlenkamp. “We realize that under-reporting will happen. It is a fact based on the national data. We’re going to try to do what we can to change that culture on our campus.”

Uhlenkamp is correct. Zero reports does not mean zero incidents of sexual violence. However, it also does not mean that 1 in 5 women are raped while in college. Indeed, it would imply that assaults on college campuses are not that common. The Washington Post was undeterred by that:

The numbers underscore what is often a huge gulf between the estimated prevalence of sexual violence on campus and the actual number of reports schools receive. A Post-Kaiser Family Foundation poll last year found that one in five young women who attended college in a four-year span said they had been sexually assaulted during that time — a finding echoed in other surveys. But a far smaller share said they reported such incidents to school authorities.

The interesting part about the survey is that if one actually reads it, one will find curious things. For example, more women than men considered women responsible reported higher rates of negative assumptions among other students about female victims:

It also worth noting that the same questions were never asked about male victims. All of the questions specific to victims’ action and concerns were gendered and only asked of female victims.

Another example are the sexual assaults results. To the researchers’ credit, they did not gender the terms. They only specified what was included:

– Sexual intercourse (READ IF NEEDED: IF FEMALE: someone’s penis being put in your vagina. IF MALE: someone made you put your penis in their vagina)

– And, Sexual penetration with a finger or object (READ IF NEEDED: someone putting their finger or an object in (IF FEMALE: your vagina or anus/IF MALE: your anus).

The problem comes in when one looks at the results. For instance, when asked, “Since starting college/While you were in college) (has/did) anyone (had/have) sexual contact with you by using physical force or threatening to physically harm you?”, 99% of men and 91% of women answered ‘no‘. That is a direct question about rape, and 95% of those asked said they were never raped. When asked if someone attempted rape, 98% of men and 89% of women answered ‘no’. Again, 93% of those asked said no assault happened. So where does the 1 in 5 number come from?

They made it up.

Or to be more accurate, they included acts in which the person said they were incapacitated: 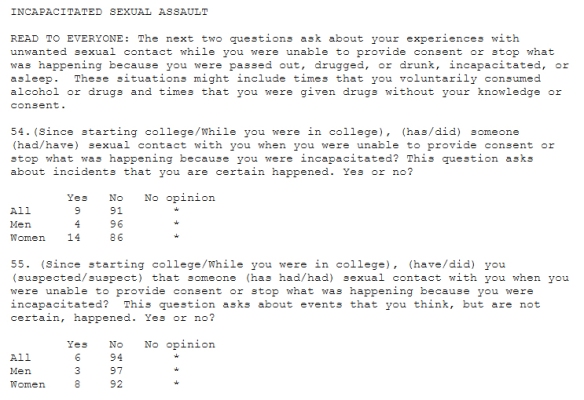 Fortunately, the survey provides a combo chart to show exactly how they manipulated the data:

I quoted the survey directly so that full context can be understood. While I would agree that sex with an incapacitated person is rape, this survey lacks any context about the interaction. It could be that the person was drunk or high and someone took advantage of them. It could also be that the person was too drunk or high to remember giving consent. That is not clear from the questions.

And yes, the survey does ask “about events you think, but are not certain, happened”. The problem is that the survey does not ask how a person is certain someone had sex with them without their consent while they were incapacitated. That is a very important question to ask because without that context the survey results could include any number of incidents are technically not rape or sexual assault.

This does not mean the results are wrong. It only means that without asking for clearer context, it is odd to add those numbers together.

Another lack of context is the actual location of the assaults. Note the language the survey used: Since starting college/While you were in college. Neither of those necessarily mean the assaults happened on the college campus or at a college event. They only mean that the acts occurred during the time the person attended school. This the same kind of loose definition Mary Koss used in her Ms Magazine survey in the 1990s that found that 1 in 4 college women were raped while in college.

The question that both surveys asked do not say that. Or, as the Washington Post reports:

“It’s a harsh reality that a lot of parents and others in society don’t want to deal with: Sexual violence is on every campus,” said Laura L. Dunn, founder and executive director of the advocacy group SurvJustice. “Any time you have a zero, it is not an indicator of safety. It is an indicator of comfort in reporting.”

Sen. Kirsten Gillibrand (D-N.Y.) said there are two explanations for why schools would have no rape reports: “Either they don’t have an adequate reporting system … or they know about the rapes and are putting them under the rug.”

Right. Following the Ms Magazine survey, most colleges created rape crisis and counseling centers. All of these are run by or in conjunction with Women’s Studies departments. Most of them receive a far amount of funding despite their apparent lack of use. They spent the last two decades peddling the notion that rape is a systemic problem on college campuses. They hosted Take Back the Night rallies, forums to teach men not to rape, and scores of lectures by women about sexual violence.

The evidence listed by the Washington Post suggests that there are not nearly as many rapes happening on campus as feminists claim. This does not mean no sexual assaults happened. It only means that the narrative and the actual data do not match. Even when they conduct surveys to determine the rate of rape the narrative and data do not match. It is only when they resort to poorly defined incidents that they are able to concoct the number they want.

That is where the trouble lies. It is not about actually stopping sexual violence. It is simply about feminists pushing their “women are perpetual victims” narrative.