At least, that is David Futrelle’s take on a piece that ran on A Voice for Men. Perhaps Futrelle simply stopped trying to make sense because his rant about the image is beyond juvenile. Here is Futrelle’s lead in:

If you want to show someone what sort of website A Voice for Men is, have them look at the following screenshot, which I’m putting below the jump because it may well trigger some readers in its depiction of the effects of domestic violence on women: 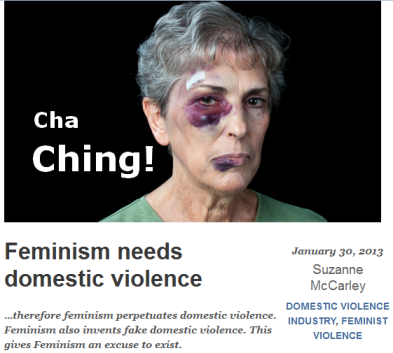 Perhaps the image is too on the nose, yet it is hardly as offensive as say posting a comical picture of a woman in a ski mask when someone writes a serious post about women raping boys.

Futrelle’s given complaint is about Suzanne McCarley’s piece arguing that feminists need domestic violence in order to support their arguments and so they perpetuate it. In the context of McCarley’s point, the above image fits. However, the picture does not seem the true cause of Futrelle’s ire. It seems to be this:

Random violence is relatively rare and tough to manage, but domestic violence is so, well, curable, right?  Who doesn’t want to stop Domestic Violence?Professional feminists, that’s who.  Without DV victims, feminists would have no rallying cry, and they would lose political power.  Here’s how it works:

Thanks primarily to the Violence Against Women Act, DV has become a multi-billion dollar industry.  This industry employs many thousands of people throughout the nation, paying them with federal VAWA grant money.  And those thousands of people have made relatively little headway in achieving their “goal” of reducing DV.  Indeed they perpetuate it.  This is by design; if DV went away, so would their jobs.  There are many, many factors involved in DV, and it’s no coincidence that feminist policies aggravate nearly all of them, but for the sake of clarity I’m going to address only a simplified but significant few of them here.

Who commits a substantial proportion of DV?  Past victims or witnesses of DV.  Who committed the DV that they experienced or witnessed?  In too many cases to count, it is women.  Women commit far more than half of all DV.  Among the vast majority of violent couples, the violence is mutual.  Additionally, women commit the majority of child abuse.    Yes, women are responsible for most DV.

When comes to statistics, neither McCarley or Futrelle do well. McCarley offered no studies to back up her claim that women commit the majority of domestic violence. Futrelle did no better:

According to the Bureau of Justice Statistics, over the period of 1994-2010, “about 4 in 5 victims of intimate partner violence were female.”

There is a problem with the BoJ numbers: they were so low for men that the study does not even breakdown the data. Indeed, the rate was so small in 2010, only 1.1%, that one would essentially never meet a man who was a victim of abuse that year.

Futrelle went on to write:

Numerous other studies using different methodologies also find that women make up the majority of victims. The only studies that find similar rates of abuse – which are also, not coincidentally, the only ones that MRAs like to cite – are based on problematic methodologies that end up essentially equating mild and severe violence, pretending that a slap on the face is basically the same as a severe beating when it comes to determining which gender is responsible for the most abuse.

Futrelle provides no evidence for the latter claim, and misses the irony of his statement. He dismisses studies that do not fit his personal view on domestic violence while blasting men’s rights activists for doing the same thing.

The former claim is easy to disprove. The Centers for Disease Control and Prevention released a study in 2010 that showed 32.9% of women and 28.9% of men experienced physical violence by an intimate partner in their lifetime (page 38). Surprisingly, in the 12-month breakdown 4.7% of men reported abuse compared to 4% of women, and this is despite the researchers using a methodology that deliberately discounted various types of violence against men.

It is also worth noting that the CDC 12-month breakdown is from 2010, yet the BoJ study shows a far higher rate of violence against women, 5.9%, and a far smaller rate against men, 1.1%. If that is not a clear indication that a more biased study like the National Crime Victimization Survey that the BoJ used can skew the results, I do not know what is.

As for McCarley’s point, she is partly right. There is research showing that women commit the majority of non-reciprocal violence. In other words, when there is only one person doing the abusing, that person tends to be female.

Futrelle could have spared himself that embarrassment by just looking up the data, but it seems he wants to give tit for tat for any point McCarley made. For example, McCarley wrote:

Thanks to VAWA, once a father is accused of DV, his chances of keeping his family (or his assets, his reputation, his friends, often even his job) are almost nil.  Conversely, most mothers have to commit “front page news” crimes to lose custody of their children.  VAWA provides billions of dollars for programs that “protect women from their abusers.”  Yet it provides virtually nothing to help men or children escape their abusers, if those abusers are women. VAWA addresses less that half of the DV it encounters.  Instead of working to reduce Domestic Violence, VAWA works to ensure that millions of children will continue to suffer abuse, and will likely grow up to become abusers themselves.

To which Futrelle replied with:

Suz, naturally, presents no evidence for any of this; she’s simply repeating a basic MRA catechism. Removing violent fathers from the home makes the home less stressful, not more.

Futrelle, naturally, presents no evidence that the fathers who lost custody are violent. He simply repeats a basic feminist catechism: only violent fathers lose custody. Conversely, while McCarley listed provided no citations, it is not difficult to find evidence of women falsely claiming abuse to gain custody.

Likewise, VAWA awards few, if any, grants for services for abused men. Few domestic violence shelters provide services to men in general, let alone men with children. Men in those situations often have nowhere to turn, and this is not problem feminists seem concerned with. So McCarley has a point: by VAWA only aiding women, the policy and those who advocate for it leave thousands of children in the hands of abusers solely because the abusers are female. Unsurprisingly, Futrelle does not address that.

However, he does think he scored a point with this statement:

McCarley: And this is the process that VAWA has institutionalized.  It no longer happens “once in a while;” it is SOP.  Was this the intent of VAWA?  Who cares?  That’s the result.

Futrelle: Well, actually, you just said explicitly that feminists intentionally perpetuate domestic violence in order to make money. You’re moving the goalposts in your own post?

That would be a clever retort if McCarley’s argument were that VAWA intentionally perpetuates domestic violence. However, her point is that feminism, via feminists, intentionally perpetuates domestic violence to sustain itself. So there is no contradiction since VAWA is a tool feminists exploit to reach their intended goal. VAWA may have been created with good intentions, but feminists have used that to their advantage.

Feminism cares about controlling, dominating, destroying and extorting the men who pay Feminism’s bills. Everything else is window dressing.

It is curious that prompted his ire. I think McCarley’s more egregious statement is:

I think this shows what actually upset Futrelle: it was not the picture, just that someone dared to question feminism and feminists’ intent. While I do not agree with all of McCarley’s points, I do question whether feminists’ goals are always altruistic. The vitriol and anger directed at those who question them and those who dare to talk about male victimization supports McCarley’s position.

Feminists like Futrelle could go a long way in disproving McCarley by acting like an adult and actually doing the things they claim they support rather than pitching hissy fits when someone calls them out for their poor gamesmanship. But I suppose it is much easier to act stupid than it is to admit someone hit close to home.